No need to get all cranky, but today it's all about the new crank for the Tractor and a failure, I haven't encountered on TR1/XV1100 before.

But let's start at the beginning, quite a while back I picked up this set of engine-cases for a more than fair price, but it was disassembled the wrong way round and the pre-owner stole the conrods off the crank. Now the thing is, you can (unlike stated in the manual) get the crank out of the cases with a very simple tool without removing the oil-pump gear and left main bearing. 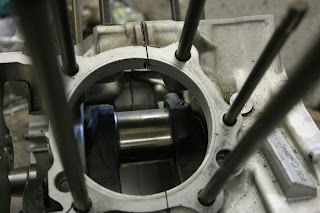 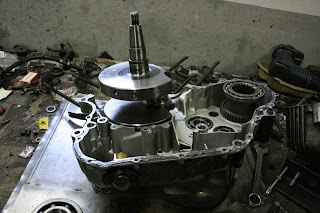 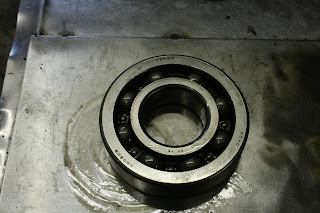 As mentioned before, this engine had a unique failure as in both main roller bearings were shot. But truth be told, I only new about the left one at this point, so... 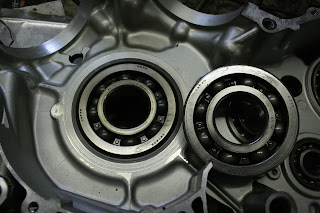 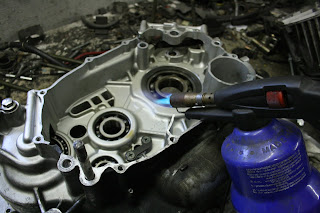 I drove it out, only to find out, that it wasn't running one-hundred percent smooth as well. A classic "oh-well..."-case.  Should you ever be in the unpleasant situation of having to buy one of these: The XV700/750 use standard 6308-C4 bearings, but the XV1000/XV1100 run on 4mm larger 40x94x23 SB0809-C4 bearings only available from a single manufacturer. Shopping around for the lowest price makes sense though as I found the same bearings ranging from 43USD to 122 Euros. (Around 130-140 USD at the current exchange rate!) 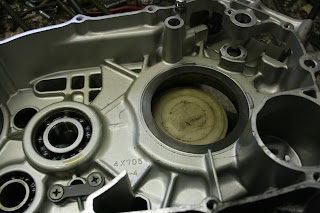 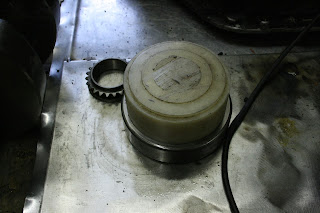 I was secretly hoping, that it was only some coked up schmoo that got in the way of a roller, but no... 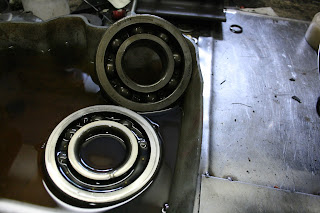 With the bearing being what it is, I turned my attention to the crank itself. I had a set of black (-10 suffix) bearing shells on the shelf and after doing the maths (crank-no. minus conrod-no. equals bearing size), it turned out that the black shells might be either one size too small or spot on the money.

Now plastigauge is some badass cool stuff. It's basically strips of wax, which you put between bearings shells, it gets squished and with a special ruler, you determine the clearance. 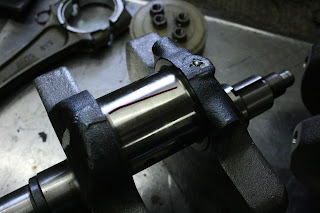 During the process I also found out, that tightening the bolts to spec made a 0.020mm difference to the picture shown below on the right. And as the spec is 0.030 to 0.054, the crank ended up being P-E-R-F-E-C-T-L-Y on the tight side. Which is what you want for longevity of your setup. 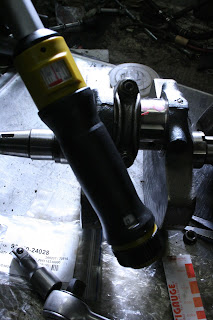 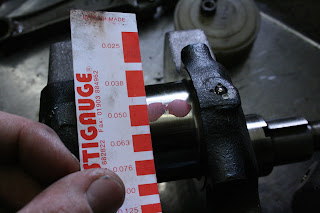 I had the pistons soaking in gasket remover gel for about a week, so it was a matter of just quickly cleaning them up with a nylon brush to remove all the carbon deposits from the top. 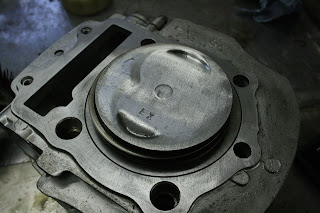 Say hello to uber-rod. Now one of the things I did for this engine (and I admit I originally planned it for the turbo engine, but that crank had done so little mileage that it seemed like a sacrilege to take it apart), I installed two rear conrods. This was done to have oil-squirters for piston crown cooling on both conrods, which is a mod, which later came from the factory on BT1100/XVS1100s. 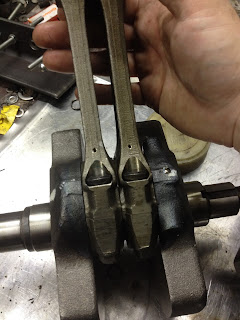 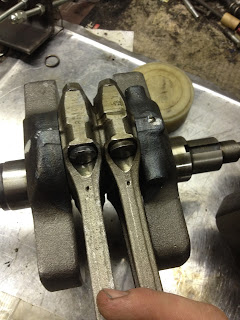 So that's it for now. In the next installment, we'll have a little look at the new engine cases and do a lot of cleaning. Well, I do and you enjoy the fact, that your hands are still clean, because mine won't be for days...
Posted by Nanno at 20:00