The new TR1 motor - preparing everything for sandblasting (part 5)

Now as you may have seen in the last post, the paint on the engine cases was pretty chewed up in some places. Normally I wouldn't mind that (much), but in this particular case, I really want to build that engine once, do it right and then basically run it for the next few years and fiddle around with the two other TR1-engines in my workshop. Mainly because I saw what constantly taking stuff apart and putting it back together does to the engine.Which is also why this engine has been dubbed "the mule".


Generally I wouldn't recommend sandblasting engine cases unless all bearings are out and then you'd still have a nightmarish job of getting out all the left-over blasting media. The other way (in theory) is to really seal off the engine, which can only be done if you have an engine like this Yamaha XV engine that hasn't got any built in breathers in the cases and only in covers attached to the cylinder heads.

Step one was to knock up a substitute for the starter motor on the lathe. 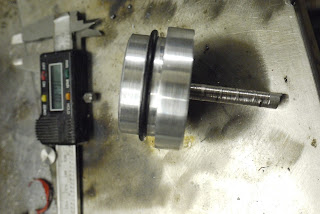 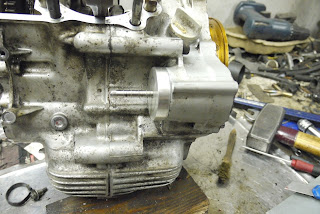 Then it was time to clean up all the mating surfaces and whilst doing that chase all threads on the engine block. Why? Because there's always some old crud in there, which will kill the threads and bolts in the long run and prevent you from torquing stuff down correctly. 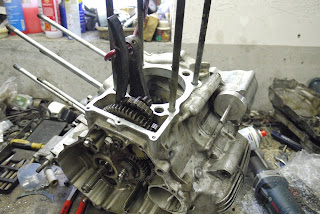 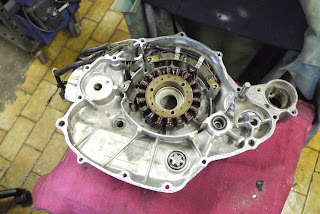 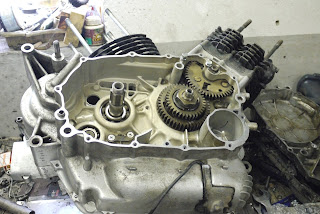 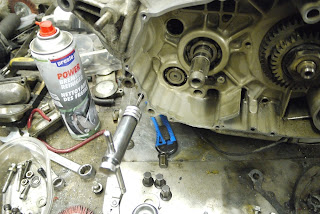 As you can see, instead of gaskets engine silicone has been used to glue on cylinders and heads (both of which are sacrifical ones) to the cases. Those extra 5 Euros in gasket goo are well spent, if no blasting grit makes it into the engine. As you can also see in the picture below: Both heads sport rear cam-gear covers as they don't have a breather hole. 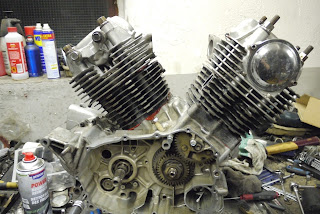 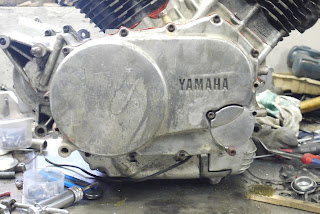 Same story on the other side, clean up all the mating surfaces, run a tap through all the threads... What you see here is pretty much the end of approx. 10hrs of prep-work. 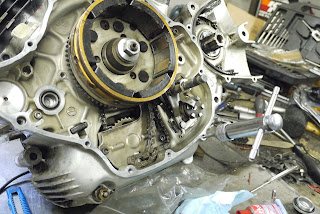 As there's not all gearbox components installed (e.g. no clutch pushrod), the clutch actuator had to be secured to the cover by other means. 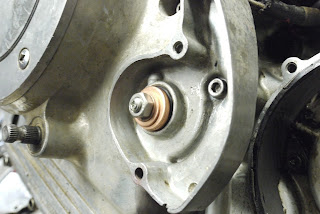 You know stuff's getting serious, when you fill your inlet ports with expanding foam. (Don't worry, those heads are complete junk... as somebody hacked into the combustion chamber... caveman style.) 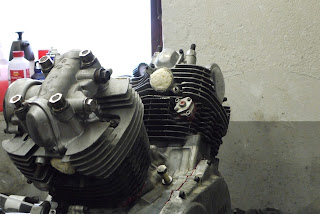